It's a Matter of Life or Death!

Besides the oh-so-important romance between the hero and heroine, in my opinion a good action story has to include the following:

An Important Goal
At least, the goal has to be important to the characters. If they don’t attain their goal, something REALLY BAD will happen.


*From Wikipedia, “a MacGuffin is a plot device in the form of some goal, desired object, or other motivator that the protagonist pursues”. Alfred Hitchcock popularized the term. George Lucas described a MacGuffin as “the object of everybody’s search.” Well known MacGuffins include the golden ring in Lord of the Rings, the Ark of the Covenant in Raiders of the Lost Ark, and in Star Wars, R2D2 – the robot with the secret plans.

In my novel Diamond Lust, the MacGuffin – what the desperate smugglers are after, and will kill to obtain – is, you guessed it, diamonds.

Non-stop Action
The story must be packed with page-turning, adrenaline-pumping events that get the hero and heroine into worse and worse trouble. Typical action sequences could include one or more of: an Abduction; a Chase; a Theft; an Escape; a Rescue; an Explosion; a Fight; etc.

The More Danger, the Better
The more complications the author adds and the more in doubt a happy ending, the more exciting the story will be. When writing the pivotal Black Moment scene in Diamond Lust, I used an abduction, fight, explosion and attempted rescue to ramp up nail-biting tension. 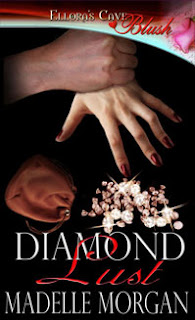 Diamond Lust excerpt set up: Heroine Petra is bound and tossed into a fuel dispenser building at the diamond mine along with her old buddy Carter.

“These smugglers covered all the angles. They will never let us live. We are so screwed,” Petra moaned.

“Didn’t you notice the AN/FO over there?”

She followed the direction of his nod to a fifty-five-pound sack wedged between two fuel pumps, the label indicating the trade name of an ammonium nitrate blasting agent. A wave of dizziness had her chin dipping to her chest. The smugglers planned one mother of an explosion. Ignited, the dispenser building and its fuel storage tanks outside would erupt into a cataclysmic fireball.

A white ignition cord dangled from a hole poked into the side of the packaging. When the white flashes behind her eyeballs faded, she knee-walked over to the sack, and with her teeth yanked out the cord and metal blasting cap on its buried tip with the intention of gently depositing it on the floor in a far corner.

“A lot of good that’ll do. They don’t have to enter this room to start a fire. They’ll open an exterior valve to flood the ground with fuel, or drop a match into a tank, or—”

“Enough, Carter! I need to think.” Why plan a massive explosion? If eliminating her and Carter was the objective, why wait? A small fire lit at the time they were dumped in the building would have killed them quickly.

“They intend to create a major diversion,” she said slowly, “to give them time to escape in the confusion.”

Will Mountie Seth Cooper fly to the rescue of his love Petra before the diamond smugglers blow her to smithereens? Find out by reading Diamond Lust!

Diamond Lust is available in print and e-formats. The digital version is a steal at $1.49 or less at retailers such as Amazon, Barnes and Noble, Sony, Ellora’s Cave, etc. See www.madellemorgan.com for more info.

Madelle, I'm curious about what you experience as you write these scenes. Does your heart beat faster, adrenaline surge, etc. or are you in a more analytical mode.

That's actually a hard question. I already know what is going to happen in the scene - I certainly cannot kill off the heroine! However, in the moment of writing the scene, I believe I am identifying with the heroine. I'm in her head. So yes, to answer your question, I do write faster than normal and am probably holding my breath.

In writing this scene I was also recalling the many times I was in a fuel dispenser building as an engineer, and was aware of some industrial oil and gasoline fuel storage tanks that had either blown up or come close to being blown up, once by a welder who was welding on a huge tank full of heating oil. My heart is beating a little faster right now, thinking about it!

Madelle, I am curious as to how you plan your books. Do you outline, brainstorm or are you a "by the seat of the pants" writer? Thanks!

I am definitely a plotter. I think about the story structure for months, research, brainstorm plot points per a three act structure, and prepare a scene outline that evolves as the book progresses. I write linearly, from start to finish, rarely rearranging scenes.

There is magic that happens in the writing of a chapter, however. It's almost like watching a play and recording the dialogue. The characters "speak up" and ket me know what I write on the page.

I think each author has his or her own unique process. It's whatever works for them!

"an Abduction; a Chase; a Theft; an Escape; a Rescue; an Explosion; a Fight; etc."

Hmmm... perhaps I need to beef up the action! Interesting post!