A Plotter's Process for Writing a Novel - Part 2 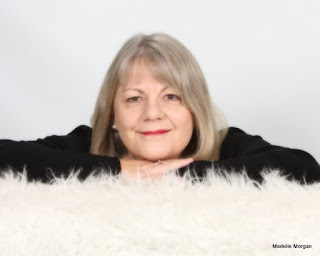 In this post I describe how I plot romance novels using the screenwriting three act structure, and list my favorite story structure experts.

In case you missed it, read Part 1 on how I develop each main character's internal and external goals, motivation, consequences, and conflict, the novel's theme, and more.

Plot describes what happens in a story. A plot structure consists of a set of beats (film) or turning points (commercial fiction). These are key events in the story. A beat/turning point is included in a scene, but not every scene has a beat/TP.  A scene is written to "hit the beats", keeping the story focused and moving forward.

Scenes are organized into acts. Readers and film viewers are familiar with the beginning/set up, middle and end approach that translates into three acts common to theater, film and fiction. However, depending on the length and type of work (plays, television dramas and situation comedies, film, literary or commercial fiction) a work can have as little as one act or as many as four (or more) acts.

A film screenplay usually is comprised of:


Observe the variety of plot structures in episodic television shows, such as Castle's A story + continuing B story about relationships or Nashville's seamlessly woven multiple plot lines.

The craft books and videos by these iconic teachers of plot structure for commercial fiction and film are excellent resources in an author's search for a story structure that works best for the type and length of story she writes.

For example, a writer of action/adventure, romantic suspense, sci fi, or fantasy may gravitate to mythic structure which is founded in thousands of years of storytelling.

Christopher Vogler's The Writer's Journey: Mythic Structure for Writers is adapted from Joseph Campbell's Hero with a Thousand Faces. Read this outline of Chris Volger's key plot points in a screenplay and you'll recognize corresponding scenes in fan-favorite quest movie franchises such as Star Wars and Lord of the Rings.

Authors of contemporary romance and romantic comedy may prefer to adapt the late Blake Snyder or Michael Hague's structures, or other variations used by screenwriters. I also recommend James Scott Bell's Write Your Novel From the Middle.

I've studied the above masters' structures and developed a mash-up for my short contemporary romances.

Plot Beats for Caught on Camera 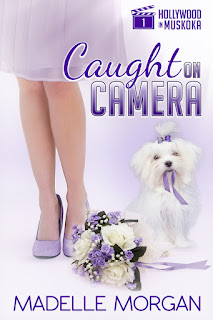 The A plot deals with the heroine's pursuit of her external goal to become a Hollywood camera operator.

Below are the beats I used for Caught on Camera's A Plot . Remember from Part 1 that this is the heroine's story.

Readers, would you like to see how I applied this plot structure to Act 1 of Caught on Camera? I'll be posting the whole book over the spring/summer on Wattpad. Half the book is up already. Follow Madelle Morgan to be alerted to new posts.

Authors, do you have any other favorite story structure craft books to recommend?

Bio:
Madelle's debut romantic suspense, Diamond Hunter was turned into an action/adventure screenplay by screenwriter Marie Lilly. The novel is available in ebook format on Amazon and Kobo for $0.99 USD and £0.99 GBP, as well as in print on Amazon. 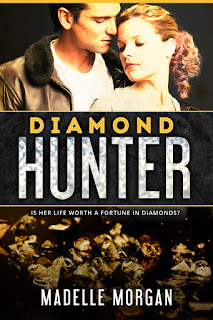 Madelle tweets and posts about Hollywood, film-making, the settings for her stories, and, of course, writing. Follow her on Facebook and Twitter, or subscribe to her blog at MadelleMorgan.com. Check out her Muskoka Pinterest boards for pins that inspired the characters and setting.

Thank you for sharing your plotting method, Madelle! I have used mythic structure and Michael Hauge's method. I'll have to check out James Scott Bell.
A free read on Wattpad! Thank you so much! I hope you'll join us on Pinterest at our Spring is Sprung Board (link in sidebar) each day thru the 26th to post on different spring-related themes, including spring releases and spring giveaways.

James Scott Bell's book is were I discovered the "Look in the Mirror" beat. The heroine takes a good look at her behavior and asks herself "Is this who I am and the type of person I want to be?" It's a universal pivotal moment, especially for New Adults. Dreams fade and priorities change as people discover who they really are and what is important.

Caught on Camera will be a summer release, but I will certainly check out the Spring is Sprung board.

You're never too advanced to learn something. Thank you for the gems. Looking forward to reading your book.

Thanks for sharing your knowledge about plotting with us, Madelle! I have Michael Hauge's Six Stage Plot Structure book mark next to my computer. I don't really write to it but I do reference it to see where I am in the story. But then I'm an organic writer so that makes sense.

Over the years I've attended many plotting workshops. I take away a little bit of something from each one and perfected my own plotting system that works for me. I think it never hurts to hear the different options and fine tune them for yourself. Good post!

I went back and read your post on the first part of your post "Who, What , When, Where", I had missed reading it. That along with the current post, is great information. Thanks for sharing. Right now I am taking a class called "Quilting 101" it is a writing class on plotting. I am learning so much from this class. Can anyone download a story from Wattpad? I have a Nook.

Wattpad is a reading app. So you download the app on your tablet/phone or go to the website www.wattpad.com You read the books right on the site. You do not download them. Wattpad is like an on-line library.

Here's a link to see all the featured romances. You can filter to see only completed books. Many, like mine, are only partially posted. You can follow an author to get messages when a new part is posted.

Always good to look at a refresher on plotting. I've attended a variety of sessions and, like Paty, I always take away something. If only I could retain more! Thanks for a thoughtful post.

Thanks for the insights in both posts, Madelle. I've been using Blake Snyder's template to help plot shorter genre novels for years, but I'm always glad to add another arrow to my quiver of tools, and your *imagineering* character outline (from Part I of your series) is proving helpful as I revise my current WIP.

That's great, Susan. I'm glad these posts were helpful. It's rather funny that you used the term "imagineering" because I'm actually a professional engineer. Innovation is based on the work of others who came before. ;)