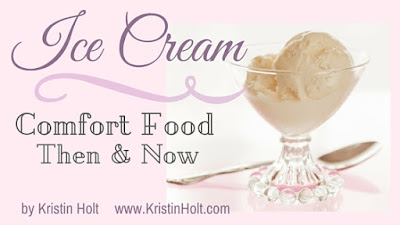 
I love ice cream. My #1 Comfort Food. Doesn't matter if it's snowing or 40 below. I never met an ice cream I didn't like (well, perhaps one flavor). 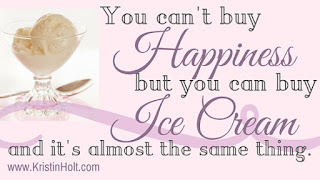 Ice cream may be produced in factories today, but it was originally a back-porch homemade treat. 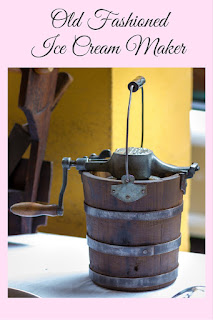 "In 1843, New England housewife Nancy Johnson invented the hand-cranked ice cream churn. She patented her invention but lacked the resources to make and market it herself. Johnson sold the patent for $200 to a Philadelphia kitchen wholesaler who, by 1847, made enough ice cream makers to satisfy the high demand. From 1847 to 1877, more than 70 improvements to ice cream makers were patented." [source]

This bit of Americana history made it easy to slip cherry ice cream into The Menace Takes a Bride.

LUKE STOOD inside the kitchen, watching Garth and Mitzi through the screen door. They sat side by side on the porch swing. Garth moved the swing to and fro with a gentle push of his feet.


Luke couldn’t see Mitzi’s face from his vantage point, but he knew she enjoyed the ice cream immensely. He’d tasted the treat delivered by the creamery. Plump, fresh cherries, frozen in sweet cream with plenty of sugar. Mitzi had been delighted.


Satisfaction swelled in his old heart.


By Jupiter, it felt good to give the dear girl a bit of happiness.


Garth, idiot that he was, may have ordered Luke to cease and desist with the presents. Luke had thought about it, for all of about five minutes.


He’d believed that eventually Garth would do his duty and court his own wife. Until then, somebody had to do it for him.


‘You can’t teach an old man to suck eggs,’ Luke had wanted to say. Who was Garth to question his father’s experience? Did he think he could tell his dad something he didn’t already know?


Luke had lived through two wars and survived a gold rush. More importantly, he’d been a husband for twenty-two glorious years. A pang of loneliness tightened about his heart. He’d been around plenty long enough to understand how a courtship ought to progress.


Garth may have ordered him to stop giving presents, to stop meddling, but Luke knew better. Besides, ice cream didn’t count. It was food, not a bauble and certainly not meddling.


On the porch, he heard Mitzi’s moans of pleasure. Luke grinned at her little-girl delight. Until tonight, the poor thing hadn’t ever tasted ice cream.


Imagine that. Ice cream. He shook his head, amazed at the simple life she’d lived.


Silhouetted against the setting sun, Luke watched with pleasure as Mitzi rested her head on Garth’s shoulder. From this distance, he couldn’t quite hear what they talked about, but they were talking. That was good enough to ease an old man’s concerns.


Cora stepped up to his side, her tread light on the kitchen floor. She folded her arms and watched the young couple for a minute, perhaps two. “You did a good thing, Luke. A very good thing.”


Yes, he had. The more he saw of Mitzi and Garth together, the more he knew he’d done the right thing.


They looked like a husband and wife, and the image made Luke grin.


A husband. He’d made his boy a husband.


He wanted to jump up and down, hoot and holler with the thrill of victory—but that would interrupt the most domestic, tender thing he’d ever seen going on out on the porch swing.


An idea came to mind, a most exciting thought. It wasn’t a gift, he rationalized. Merely her due. Mitzi was a Wakefield, not a nun. She deserved more than a plain gold wedding band. If Garth had found Mitzi on his own, he would’ve wooed her with a diamond the size of a quail egg.


If Garth knew how to court properly, he would’ve bought Mitzi a diamond already. The boy would appreciate a little help getting the shopping done.


“Tomorrow morning, you and I are visiting the jeweler.”
Copyright © 2013 Kristin Holt, LC 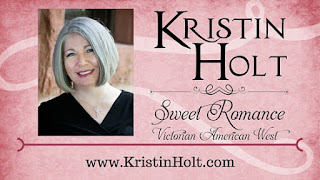 Absolutely Love Cherry Ice Cream!!! And I fondly remember fighting with my brothers as to who was going to turn the crank on the ice cream maker. My dad finished it off because once it started freezing it was a tough turn for us. I don't remember making ice cream when I was in my teens. Now, now I have an electric one that I seldom use because I could eat ice cream morning, noon and night! Thanks for the recipe, Kristin - that would be something from my Camp Fire Girl days except I know we never made ice cream.

Great excerpt! We had homemade ice cream while I was growing up as well as creamery ice cream because we sold cream to a creamery. Nothing better than a bowl of ice cream any time! Fun post!

Many thanks, Judith Ashley, for your fond memories and sharing your love of ice cream (we're cut from the same bolt of cloth!)
Thanks for dropping by, reading, and commenting.
Cheers,
Kristin

Thank you, Paty! Your kind words feel so good. =) Thank you for visiting!
Best,
Kristin