Most of the time I write Romantic Suspense. I love the genre and find the possibilities endless and exciting. It takes the thriller reader in me and wraps it around the boy raised on Broadway and Hollywood musicals. Fred Astair I have pretty well covered from The Gay Divorcee to The Towering Inferno. Bing from The Big Broadcast to Stagecoach. No, No, Nanette to Pippin. Favorite movie? Notting Hill. I grew up to be the one in our relationship who cries at happy endings which still makes my grown daughter giggle no end.

There something about romantic suspense that snares me. Taking that heat of danger and the slowly tightening bands of tension and leveraging them to crank up the pressure on the romance with no emergency relief valve... Actually, there's a tip for anyone who wants to write good romantic suspense, when you get to that upper relief valve limit, don't give in. Let your characters suffer without it until they are forced to "blow" and face whatever truth or reality it is that they must face.

But that mad romantic in me comes out every now and then. He comes out when he went to bended knee and forgot every word he'd ever intended to say and had to point mutely at the ring he held forth as a proposal. (And I won't mention the part of the ceremony that my bride had to read because I was too busy crying.)

My first adventure into straight contemporary romance led me to the Pike Place Market and Seattle's waterfront. It is an area that I've haunted by land and sea for over two decades and is very dear to my heart. To take that passion and all of that joy and bring it to five love stories was just so much fun. It all began when my wife gave me a calendar of a dozen lighthouse and we decided to make that our mission for the year: to visit them all. That was when I had the idea to send my own hero and heroine on the same journey in Where Dreams Are Born. 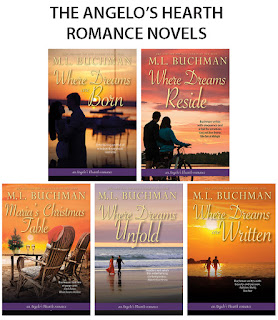 Several years later, I now live on the Oregon Coast. And if there was ever a more romantic place, I haven't been there. The first two novels in the Eagle Cove series are out and two more will be following soon. I grew up in a town of twelve hundred people and ten thousand head of dairy cow. I've lived on islands with a total population of seven hundred and one general store. And someday, my ridiculously romantic heart, hopes to live in a town just like Eagle Cove. 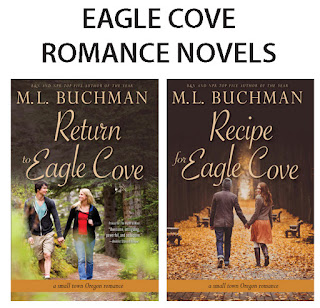 Romantic suspense and contemporary romance are a world apart, and I'm so glad to be in love with both of them.


M. L. Buchman has over 40 novels in print. His military romantic suspense books have been named Barnes & Noble and NPR “Top 5 of the year” and twice Booklist “Top 10 of the Year,” placing two titles on their “Top 101 Romances of the Last 10 Years” list. He has been nominated for the Reviewer’s Choice Award for “Top 10 Romantic Suspense of 2014” by RT Book Reviews. In addition to romance, he also writes thrillers, fantasy, and science fiction.

In among his career as a corporate project manager he has: rebuilt and single-handed a fifty-foot sailboat, both flown and jumped out of airplanes, designed and built two houses, and bicycled solo around the world.

He is now making his living as a full-time writer on the Oregon Coast with his beloved wife and is constantly amazed at what you can do with a degree in Geophysics. You may keep up with his writing and receive exclusive content by subscribing to his newsletter at www.mlbuchman.com.
Posted by M. L. Buchman at June 22, 2016

Hi Matt--
Gorgeous book covers!
I'm glad you're in love with both romantic suspense and contemporary romance. Thank you for many hours of reading pleasure.

Matt,
Great blog post! I love your beautiful covers too! The Oregon coast is definitely a romantic place. Good luck with sales!

Matt, thanks for sharing so much of your writing process and ideas, including those great covers with us. I'm a particular fan of you contemporary romance so glad you continue to write them.