Caught on Camera Launch is Over 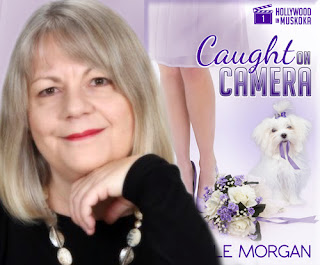 The Caught on Camera launch wrapped up December 2.

The tour was packed with interviews, guest blog posts, ten (10!) reviews, and giveaways on blog host sites. Find all the perma-links to these posts at MadelleMorgan.com.

Books Chatter created the photo-mashup. Wish I knew how to do that!

Some of the reviews were posted on Amazon or Goodreads. Here are a few quotes:

To Be Read : “I laughed myself silly. This book is exactly as advertised. A quick, flirty, romantic, comedic romp in the style of Maid in Manhattan.” 4 stars.

The Travelogue of a Book Addict : “It was full of drama, romance, humour, love and sadness. It catered to all sides of my heart and mind.” 5 stars!

Fire and Ice Book Reviews “I loved the mix of romance, humor and play on relationships in this novel!” 4 stars.

I prepared four Caught on Camera excerpts for the tour, and this one wasn't needed. Rachel officially meets the man who'll change her life.

An electric golf cart carrying two men crunched over the pebbled path adjacent to the fairway and stopped.

“Mopette,” the driver called in a deep voice.

Obediently Mopette lifted short legs from wet muck and yanked Rachel toward the visitors. While Rachel’s attention was distracted, Mopette had ventured deeper into the weeds bordering the pond. Oops.

Oh my gods! The A-list star who owned his own film production company appeared more gorgeous in person than in photos in the entertainment blogs she followed. She froze, hitched a breath, and held it. Her first celebrity in the flesh. She’d seen all his movies, of course. He owned the screen in every scene.

Halden unfolded long legs and levered his six feet six inches from the cart. The blond Adonis, with piercing blue eyes and muscular build reminiscent of Chris Hemsworth, supplied a blindingly sexy smile that reputedly had caused teenage girls to faint. No doubt he expected her to explain what she was doing with Candy’s dog. She scrabbled for appropriate words. He probably had no idea she’d be walking down the aisle ahead of his bride.

“Ms. Kane—” She caught herself. Cousins use first names. “Candy asked me to walk the dog.”

Ignoring his golf partner, Halden offered her a hand the size of a dinner plate. “My name’s Halden Armstrong. And yours?”

“Rachel Lehmann, sir, I mean, Mr. Armstrong.” She switched the leash to her left hand and held out her right. His hand gently enfolded hers like a baseball glove before releasing it. “I may never wash this hand again,” she blurted without thinking.

He raised his chiseled chin and laughed, clearly in an excellent mood. “Hey Mick, I have a fan way up here in Canada.” To her, he invited, “Call me Halden.” He gestured with his thumb over his shoulder at the shadowed figure in the golf cart. “That’s Mickey McNichol, the agent who launched my career. He’s one of my groomsmen.”

The other man climbed out of the golf cart and approached them. Eeep. Mickey was the guest she’d slathered with sunscreen that very morning. Does he recognize me? Her heart tip-tapped under the skimpy top.

Dwarfed beside the easygoing groom with the superhero body, Mickey appeared shorter than his actual five foot eleven height. His lean physique pulsed with contained energy. She felt a pull, and not from the leash. Her hands itched to stroke those taut muscles hidden under his shirt.

Dimly she realized Halden was speaking. “Mick, Candy texted me an hour ago about Rachel, her Canadian cousin who’s stepping in to replace the missing bridesmaid.”

Mickey’s assessing gaze smoothly raked her body from freshly dyed blond hair to passion pink polished toes without any sign of recognition. “Pleasure to meet a cousin of Candy’s, Rachel.” He took her hand and gave it a hearty shake. “Let’s have a drink after the rehearsal. Speaking of which”—he briskly addressed Halden, who rubbed the underside of Mopette’s chin with the toe of his golf shoe—“it’s three-thirty. We need to shower before the rehearsal starts at four.”

“Relax.” Halden waved a hand to dismiss the urgency in Mickey’s voice. “They can’t start without me. Besides, I’ve got a hundred bucks on the game and I’m winning. Rachel, may we give you a lift to the clubhouse?”

Rachel was about to accept when she spied Mopette’s muddy brown stumps. “Oh my gods!” she yelped. “Candy will be furious.”

Halden’s deep, throaty chuckle echoed across the fairway. “Candy treats that dust mop like a toy instead of a live animal. I’m happy to see it have fun for a change.” He aimed a wickedly amused grin at her and winked.

Dazzled, Rachel forgot to breathe. This, she told herself, is star power.

“Don’t worry,” Halden continued. “Wendy’s a sport. Sneak Mopette into a bathroom, and she’ll hose her down.” He climbed back into the golf cart. “Catch you later.”

Halden was real, Rachel decided. A truly nice guy, despite his fame and fabulousness. But it was Mickey who’d made her heart pitter-pat. His intense energy tugged her like metal to Magneto of the X-Men movies.

To achieve her dream of working on Hollywood film sets, star-struck chambermaid Rachel Lehmann needs $35,000 for film school tuition. When she's asked to stand in for a missing bridesmaid at a movie star's wedding and pretend to be the bride's cousin, it's her big chance to secretly take photos of celebrities and sell them to the entertainment media. Then Mickey, one of the groomsmen, sweeps her off her feet.

Mickey McNichol, cynical talent agent to the stars, believes everyone in show business is out for what they can get. When he falls for the bride's "cousin", he thinks he's finally met a woman he can trust. But if Mickey discovers Rachel's secret, he'll ensure she never works in Hollywood.

Buy links at MadelleMorgan.com: Caught on Camera is promo-priced at 99 cents over the holiday season.

Madelle Morgan is the author of Caught on Camera, a New Adult romantic comedic romance, and Diamond Hunter, a romantic suspense. Madelle tweets and posts about Hollywood, filmmaking, the settings for her stories and of course, writing. Subscribe to her blog at MadelleMorgan.com.

Great excerpt, Madelle! I love that you got ten reviews from your book tour.That's awesome!

Wow! Madelle!!! I love this excerpt! Congratulations on your first-ever Blog Tour. May many sales and much visibility be the result!