This month, I want to talk about my trip to a writer's conference and the current issues with RWA, diversity and the Ritas/Golden Heart.

I spent the first weekend of April in Milwaukee, at the 2019 Wisconsin RWA Write Touch writer’s conference.  I began by attending the writer's intensive, a Friday session presented by Lisa Cron (http://wiredforstory.com/) on what readers really want. I don't know how she found the energy and stamina to lead us through an entire day. 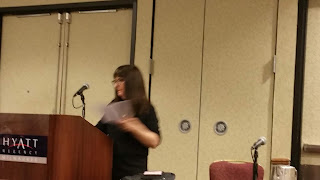 Lisa talked with us about the importance of story to humanity. Storytelling is a part of every culture around the world. Story, she said, is the difference between what a character is willing to say out loud, and what they are really thinking about things they don’t say. As humans, we come to story with a question, what will this story teach that will help me survive. We want clues that will help us in both the physical world, and the social world, the land of interacting with other people. We search story for clues that will help us see ourselves and live our lives successfully.

Listening to that made me consider the lack of discussion about the RWA’s recent revelations about continuing problems in the Rita contest. When I arrived at the conference, I expected to hear gossip  on the subject. Mostly I heard loud, resounding silence. If attendees did talk about #RitasSoWhite, no one did so when I was around. Note, I saw only two other African American attendees and they were only signed up for the intensive. Once that ended, I found myself the only black person in the room. I can't help wondering if that was behind some of the silence on the subject. The one exception came during the final keynote address of the conference. 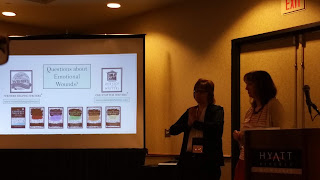 Angela Ackerman and Becca Puglisi, (https://writershelpingwriters.net) authors of the Emotional Thesauraus and a variety of companion books for writers. They discussed Emotional Wounds, the kinds authors inflict on our fictional creations. One kind of emotional wound they discussed with us is caused by a person being faced by an ongoing detrimental situation. Authors of color in the RWA have faced problematic ongoing situations for years. If this were characters in a romance story, the authors would be seeking ways to heal their emotional wounds. 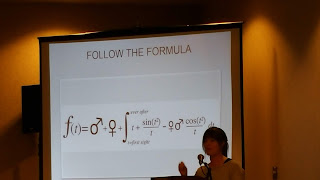 The conference's keynote speaker Maya Rodale (http://www.mayarodale.com/) showed us the "formula" for romance novels. We all laughed at the reminder that too many outside the industry looked down on the romance genre and say the authors merely follow a formula, and therefore less than "real writers."

At the end of the final day, Maya gave a keynote address, that reminded us that we romance authors have superpowers. Other authors, largely male, of other genres may put our product down or claim romance authors don't really know how to write well. Those belittleing words get white RWA authors up in arms.

Unfortunately, when you exchange race for gender, too many are silent when romance writers of color, especially black authors, are downrated or ignored in the Golden Heart and Rita contests, the major awards for romance writers. When the issue is race instead of gender, numerous white RWA authors have said their African American counterparts couldn't cut it in the Ritas because they can’t write. Or maybe its because their black characters "aren't realistic." I have rarely seen assertions like those challenged by their fellow white RWA members, no matter what the statistics collected by the RWA organization say. The numbers are just a bleak for LGBT authors.

Maya Rodale reminded those present of the contract authors make with readers: to give them a chance to see themselves in a romance. We should use our power to ensure there is romance for everyone. That includes those who don't usually get to triumph in real life. People of color, the disabled, and those identifying as LGBT deserve to see themselves on the page, experiencing joy and getting a happily ever after.

It's not just about everyone rushing to write those characters their books. Especially if those characters is not authentic to them. Maya said, if authors do one thing, it is to read more books written by these authors. Read them with an open mind and see what the Ritas have been missing. Let yourself get swept up in stories about people who are different from you, and then, tell your friends about them. Then, everyone wins.

Here are some black romance authors you might want to try, in addition to the supreme Beverly Jenkins:

This is only a tiny list of everything that is available. Let's do what we can to spread more love and joy in the world.  We can play a part in making the world a better place and expanding the boundaries of Romancelandia by seeking out a a wider variety of romance authors to read. 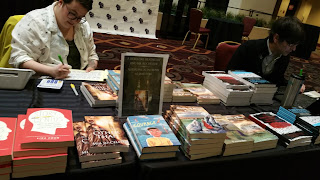 My book Courage (https://www.amazon.com/Courage-Barbara-Binns/dp/0062561650) played the "one of these things is not like the others" game at the conference bookstore. Several hotel guests bought copies of the book with the black boy on the cover and asked me to sign. One conference attendee also purchased a copy.

See, there is something for every reader.

B.A., Thank you for sharing your experiences and thoughts. Very timely and for me at different slant on the conversation.

Great post, B. A. I am working harder to read and promote diverse authors, and will refer to your list as I find new books to read.

Thank you for sharing your experiences and insights, B.A. I love what you said about using our power to ensure there are romance stories for everyone. Part of that is ensuring all authors receive fair treatment and equal opportunities.

Your experience at RWA Wisconsin sounds similar to many less-represented groups experiences. I'm glad that the speakers did speak to the issue. I can assure you that in FB, in the author groups I belong to, many people are speaking to it loudly. And from what I've read RWA has recognized there is a problem but it will take them some time to try to fix it.

I haven't been a member of RWA for six or seven years now. I first became disenchanted when they looked down on romantica. Not that I wrote romantica/erotica but I found it disengenous that a genre about romantic love had rules about how much sex was too much. It took them three years to accept those authors. Then there was the kerfuffle about LGBT characters back around 200r or so. Though there were a number of RWA members writing LGBT romances, and winning some major literary awards in other genres (like SF and Fantasy) they weren't eligible for the RITA which was specifically described as a love story between one man and one woman. Later those stories also became eligible but they never won. Sound familiar? That added another reason to leave.

I have to admit to being naive about the issue with books contain African American characters not winning. I mistakenly thought that trad lines like Kimani and Dafina were getting the same exposure. Evidently not.

The final straw for me was the obvious disdain for self-published authors. It was like an explanation for all that had gone before. Anything different, anything not mainstream and pre-determined by Big Publishing was not acceptable. It turned out that many erotica titles were not by mainstream publishers. And many LGBT titles were not by mainstream publishers. And outside of a couple of African-centric story lines like Kimani, many people of color were also self-publishing.

It has gotten better in mainstream publishing and that is why/how it has started to show up in RWA as well. For me, after working in the system for 15 years, I had just had enough. I know RWA will come around. The always do. It just takes a long time--years to change the culture of a large organization that serves over 10,000 writers.