Over the weekend, I was invited to speak at the 2019 StoryStudio Writer's Festival at Columbia University in Chicago. James Klise, fellow YA author and Edgar Award winner, interviewed me about my most recent middle grade novel, Courage. In the process we talked about what it means to have courage, and shared information from Courage, and my work in project.

One particular line from this working  manuscript relates to this month's Romancing The Genres subject, superheroes:

"He is my hero, no superman cloak required."


This line is from my teen hero, speaking about his father. It's important to me, because I tend to write family dramas, about real people and their all-too real lives.

Superheroes are great. Lord knows Marvel’s Infinity Saga had me mesmerized. I was a Xena, Warrior Princess fan when I was younger, and I liked watching Wonder Woman, both Linda Carter and Gal Gadot. But mostly, I like ordinary men and women. People who rise to the occasion when a real-life crisis occurs.

People like Clara Belle Drisdale, a “hidden figure” in her own right. Born in 1885, her parents were former slaves and sharecroppers. She earned a scholarship and graduated as class valedictorian from Prairie View Normal and Industrial College now (Prairie View A & M University) in 1908. Armed with her certificate in Domestic Arts, she took over as head of the sewing department at Prairie View.

That was just her start. After marrying Jaspar Williams, she spent over 20 years, during a time when Las Cruces public schools were segregated, Clara taught Black students at Booker T. Washington school by day, and their parents, mainly former slaves, by night.

She also chose to continue her own education by enrolling at the segregated school now known as New Mexico State University (NMSU). Many of her professors refused to allow her inside their classrooms, forcing her to stand in the halls to listen and take notes. Despite the significant obstacles discrimination placed before her, she received a bachelor’s degree in English from NMSU in 1937. Even then, she wasn’t allowed to walk with her class to get her diploma because of segregation laws. 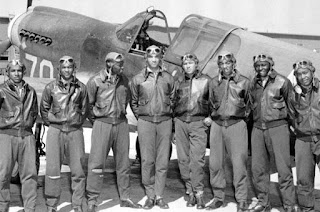 In addition to going after her own education, she raised three sons. All three achieved medical degrees. Mrs. Willliams' middle son, Dr. James B. Williams, was part of a handful of young men who became one of the Tuskegee Airmen, America’s first black airmen. He was one of the 101 black officers who attempted to integrate a segregated officers’ club in what became known as the Freeman Field Mutiny. In later years, he served as physician to Dr. Martin Luther King, Jr., when the civil rights leader lived in Chicago.

Her eldest son became chairman of obstetrics and gynecology at St. Bernard Hospital in Chicago. He was a fellow of the American College of Obstetrics and Gynecology, and past president of the Cook County Physicians Association, and a founding director of the Seaway National Bank of Chicago, now the country’s largest black-owned bank. Working together, the three men went on to found the Williams Clinic in Chicago, Illinois. 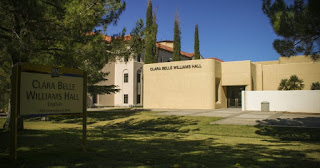 In 1961, New Mexico State University renamed a street on the NMSU-Las Cruces campus as Williams street in her honor. She received an Honorary Doctorate of Laws degree from the university in 1980.

On Sunday, February 13, 2005, New Mexico State University celebrated Clara Belle Williams day, “in honor of a person who was unquestionably a pioneer,” in the words of President Michael Martin. As an additional honor, the school renamed the English Building, which houses English Department classrooms and offices, as well as the writing center, as Clara Belle Williams Hall. 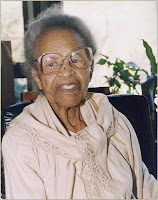 This real-life superwoman succeeded  in pursuing higher education despite the significant obstacles discrimination placed before her.

After a lifetime serving as an inspiration to her family and the people she met, she died on July 3, 1994 at the age of 108.

This all combines to make me name the fictional school in that work-in-progress after this remarkable woman.  Even more, I am looking into making Clara Belle and her daring Tuskegee Airman son the subject of a future biography I will write.

I plan to do more than simply worship this superhero from afar.
Posted by B. A. Binns at October 09, 2019

Email ThisBlogThis!Share to TwitterShare to FacebookShare to Pinterest
Labels: B. A. Binns, Binns, superhero, superheroes, WWII

Barbara, Clara Belle Drisdale Williams is definitely a super heroine who shows us the power of not only education but more important determination and dedication. Thank you for introducing her to me and to our readers!

Beautiful post, B. A.! I look forward to seeing your work on this remarkable woman.

Imagine going from standing in the hall taking notes and not being allowed to cross the stage at graduation, to having streets and buildings named after you and having your life celebrated! And she must have been so proud of her sons' accomplishments. Wow! A family of superheros!

WOW - I love hearing these stories of real heroes and heroines. Let us know when you write this biography. Will it be aimed at Middle Grades? What a powerful lesson for kids to hear about remarkable women, and not only their accomplishments, but what their children went on to accomplish. Thanks for sharing this beautiful story.