The SAD truth about Christmas time

Seasonal affective Disorder (SAD) has probably been around since the beginning of humanity but it was not described until 1984 by Dr. Norman Rosenthal. SAD is a form of depression also known as seasonal adjustment disorder.

Thanks to artificial lights, the world is now active 24/7/365.  Humanity has lost a connection with the seasons and the rhythm of the days. For some of us, this is extremely bad news that can't be helped by holiday lights, no matter how bright or cheery. As an author, this was a period of disaster. I couldn't think. For someone who calls herself a good plotter, during my SAD times, I couldn't write a thing. Depression is a mind-eater. The only thing usable I accomplished during wintertime was an end-of-days short story back in 2012.

People with symptoms of SAD often live with the condition for many years before they are diagnosed. Many are like me. I self-diagnosed long before 1984. One winter, when I was in my twenties, I went through a period of depression. I knew with absolute certainty that some nameless disaster was coming and All I could do was wait for the end. Coming out of that depression was a miracle that occurred around mid-March. I prayed I would never be that down again. My prayer was answered, until the next October.

I went through this cycle three years running. By the fourth year, when the feeling of nameless terror came in October, I remembered the pattern. I was finally able to tell my self that I just needed to wait for the equinox, mid-March. By the time days and nights were of equal length, the feeling would be gone and I could finally say, "Here comes the sun," in the words of the Beatles song. 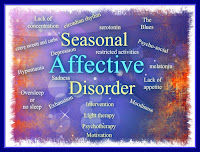 Estimates are that approximately 500,000 people in the US suffer from Seasonal Affective Disorder, and around 10-20% of the US population suffer from milder forms of the disorder.


SAD can begin at any age. However it most commonly develops before the age of twenty-one. This form of depression is almost five times more likely to be found in women than in men.


Many symptoms of SAD are similar to those associated with "ordinary" depression, such as anxiety, changes in mood and panic attacks.  Other symptoms include:

When light hits the retina in the back of the eye, messages are sent to the parts of the brain responsible for sleep, appetite, sex drive, mood and activity. If there's not enough light, these functions may slow down, or even stop. That may be one reason why those with blue-eyes seem more resistant to SAD. Blue eyes allow more light to get into their brains. 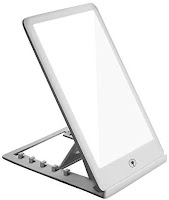 Treatment for SAD involves exposure to artificial light from a light therapy box for an average of 2 hours each day. The light given off by the box mimics natural outdoor light and is at least 10 times the intensity of standard domestic lighting.

Needless to say, I have had one of these boxes for years. Unfortunately, it only helped a little. At least I no longer feared the world could end at any moment. I still had no will to write.

Last year, my doctor also prescribed antidepressants. The light therapy alone barely held the unseen monster at bay. The combination does the trick. 2018 was the first time I tried the pills, and the result was amazing. This year, as soon as the first snow hit in October, I began taking my meds. No monsters at all. (Although getting out of bed in the mornings remains a problem.)

The biggest news for me is that with my lights and medicines, I can write in the winter. Yay!! Winter writing is still slower than during the summer months, I can't deny that. But I can now plot, Craft engaging dialog, even perform edits. And the story does not have to be about the end of days! Before, winter was a holding time. I might be able to think about a story, but not to write.

PS, for many sufferers, the worst is yet to come.

According to The Canadian Mental Health Association, January 19, is the most depressing day of the year. Not only because of dreary weather and lack of sunshine, but also because this is the time people start getting their bills from all that holiday shopping. It’s also the time where many give up on their new years resolutions.


Many people suffer from clynical depression. This is not the same as being depressed because of an external reason like a death in the family, or the loss of a job. Some sufferes are like me. We manage to function, barely, all the while desperatly wishing we were bears so we had an excuse for hybernation. It doesn't have to be from SAD, in fact the good thing about my form of depression was that there was an end in sight.


If any of you suffer from depression, I would like to hear your strategies for coping and remaining motivated to do things.  Don't be afraid to see a professional, it is not a disgrace or a weakness.  Don't let the holiday spirits of others war you down they way they sometimes did me.

Email ThisBlogThis!Share to TwitterShare to FacebookShare to Pinterest
Labels: B. A. Binns, Binns, mental health, SAD

Excellent post, B.A. While I do not have SAD (and I didn't know blue eyes let in more light!) I have several friends who do. However, I do have times when external events or perhaps my own health issues sucks the energy right out of me. I give myself a break as in a day off from everything that isn't essential and I consciously make notes of gratitude and put them around the house. I also bury myself in books - usually rereading old favorites because I don't retain new ones. There are some things that bring me joy no matter how down I get and I concentrate on doing them or remembering them.

Great post, B. A. I have also experienced depression, and agree with your suggestions. If it's a mild case of the blues, I can combat it by increasing my exercise and Vitamin D intake, indulging in chocolate more often, and talking to trusted friends and family. But for actual depression, I go see my doctor and find a solution with her.

I have major depression and SAD. I use a light box from September through March, and my doctor has me cycle an antidepressant med, adjusting the amount incrementally upward from the longest day of the year in summer to the shortest day of the year in winter. Then I cycle them downward incrementally until the shortest day in summer, rinse and repeat. :-)

Everything you, Judith and Lynn said is pretty much what I do to cope.

I don't know about SAD but I do suffer from Depression. This was a good post and refreshing adn hopeful in some ways to know how many others suffer. I have written three poetry books. I can't take most medications so I found writing it down helped and I am hoping helps others. It is so hard to feel so sad so often and continually battling to stay on top of things.
Great post.