My favorite Villain is a Heroine! by Peggy Jaeger

So in deciding who my favorite villain is in literature, the only name that consistently showed up in my head really isn't a villain, according to the book reading world. It's a person whose actions are so wonderfully vile and self serving, though, that she really must be declared a villain.
If you know anything about me you've probably already guessed I'm talking about Scarlett O'Hara. 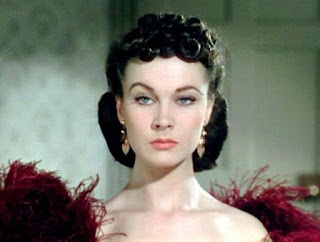 She of the original resting bitch face, Scarlett O'Hara, is supposed to be the heroine of Gone With The Wind, but in my mind she holds a dichotomous role as pure villain.
According to Webster's Dictionary, a villain is:  a character whose evil actions or motives are important to the plot.
Everything Scarlett does in GWTW is crucial to moving the plot line of the book forward. And everything she does can be interpreted as evil.
Cases in point:
She agrees to marry one man just to make Ashley Wilkes jealous.
Then she marries another just to spite her sister ( because the sister loves him)
Then she goes after Ashley again and let's everybody knows it.
She tries to trick Rhett into giving her money while he is jail.
She runs a business using convicts as cheap labor and doesn't care about them just so she can never be poor again.
She blames Rhett for the death of their daughter and once again goes after Ashley after his wife dies.
Everything she does is self serving. She tries to convince herself it's because she wants to protect her home, Tara, and her family, but in reality she is a narcissistic, egomaniacal, conniving, blatant manipulator who has been spoiled since birth and wants everyone to dance a jig at her feet.
If that isn't the offshoot definition of villain, I don't know what is.
Yes, her life is tragic. Yes, she suffers loss in the most grievous of ways. And yes, she is a victim of circumstances.
But....it's how she handles and deals with all those events that make her a villain in my eyes.
And she is such a delicious one, too.

Peggy Jaeger is a contemporary romance writer who writes Romantic Comedies about strong women, the families who support them, and the men who can’t live without them. If she can make you cry on one page and bring you out of tears rolling with laughter the next, she’s done her job as a writer!

Family and food play huge roles in Peggy’s stories because she believes there is nothing that holds a family structure together like sharing a meal…or two…or ten. Dotted with humor and characters that are as real as they are loving, she brings all topics of daily life into her stories: life, death, sibling rivalry, illness and the desire for everyone to find their own happily ever after. Growing up the only child of divorced parents she longed for sisters, brothers and a family that vowed to stick together no matter what came their way. Through her books, she’s created the families she wanted as that lonely child.

When she’s not writing Peggy is usually painting, crafting, scrapbooking or decoupaging old steamer trunks she finds at rummage stores and garage sales.

A lifelong and avid romance reader and writer, Peggy is a member of RWA and her local New Hampshire RWA Chapter.

As a lifelong diarist, she caught the blogging bug early on, and you can visit her at peggyjaeger.com where she blogs daily about life, writing, and stuff that makes her go "What??!"

I don't write pathological villains into my books because there really is enough evil in the world right now. My latest summer novella is VANILLA WITH A TWIST a sweet, small town summer romance about second chances, ice cream, and life changes/choices. 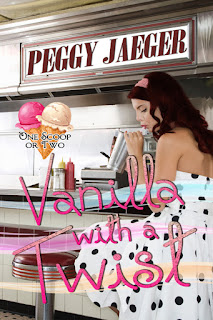 Interesting perspective on Scarlett O'Hara. One of my favorites as well.

I never thought of it that way, but I agree with you.

JOanne thanks for visiting. Scarlett continues to be a bit of an enigma to so many!!!

Jennifer - it's a weird perspective on a character, I know, but she really is the best of both character arcs!

I always saw her as a spoiled brat. Interesting post!

Ilona - that she is...but as an adult, she is - to me - more villainess than bratty!

How interesting--I always saw her as a kind of villain too. Selfish, spoiled, inconsiderate, she didn't deserve Rhett!!

I loved Scarlett, but I like arrogant heroes, too. She was all Barbara said but she was a force no one could ignore. She was Scarlett, and everyone knew it.

This is wonderful. I always thought she was a selfish, spoiled brat. One of my friends came to our Halloween party wearing drapes (with the rod) as her way of mocking the rotten little thing. Beautifully said.

I never understood why people called her a heroine. Never liked Gone With the Wind. It's reassuring to discover I'm not alone!

Linda- there is certainly no one like Scarlett - and I want to say Thank you ,,Jesus for that! Heehee

Pam - I would have LOVED to have seen that costume! REAL GONE WITH THE WIND was one of my fav Carol Burnett episodes ever. "I just saw this hanging in the window and had to have!"

Sarah - I actually loved GWTW for so many reasons, it would take another blog post to list them all. But the main reason was Scarlett. Until the book came out there had been no other character ever written who was quite likeher.

Peggy, I think I'm "odd man (actually woman) out" here. I never read the book and have never seen the whole movie although I did see the Carol Burnett Show episode more than once. One of my friends says it is her all time favorite movie. I think it is because she loves the splendor/luxurious living that is a part of the setting. She's also a fan of Downtown Abbey more for setting and clothes/jewels than actual story line.

Judith that skit on C. Burnett is one of the classic comedy skits of all time!!! While I loved the movie as a younger person, I can see these days why it's begun to be vilified. But I can still not like them movie and adore Scarlet for the horrible person she was!