A proud Canadian, I’ve been fortunate to travel across Canada from the Atlantic to Pacific to Arctic coasts. I’ve lived in three provinces but the highlight of my vagabond life was the adventure-filled five year period I lived in the Northwest Territories (NWT). Together with the other two northern territories – Nunavut and Yukon (adjacent to Alaska) – the territories in grey on the map comprise Canada’s last (and bitterly cold) frontier. 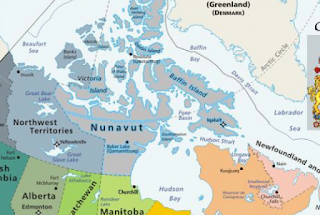 During frequent trips for my first job after graduating with a degree in civil engineering, I stayed for a few days or weeks in isolated communities of only a few hundred indigenous First Peoples. These tiny hamlets are scattered hundreds of miles apart along the vast Arctic Ocean coastline and on the shores of major rivers and lakes for traditional access to hunting, fishing, and trading. I flew in small planes across the northwest passage to barren Ellesmere, Baffin, Victoria and Banks Islands literally at the top of the world.

Above the treeline, the only trees you’ll see are on satellite TV or the internet. The Inuit maintain ancient traditions of handcrafting clothing and footwear from tough waterproof sealskin to withstand fierce winter winds and -60 deg Fahrenheit.


Below the treeline, the Dene aboriginals had contact with fur traders who introduced imported European woolen cloth and beads. The Dene women today continue to design and sew articles of clothing and footwear made from caribou, moose hide and stroud (a type of woolen cloth that was originally made in Stroud, UK). The items are trimmed with beaver or rabbit fur, and decorated with beads, embroidery or dyed porcupine quills in patterns similar to those of their North American aboriginal and Métis counterparts below the 60th parallel.

I was lucky to buy wearable art from the Dene and Inuit at the source; that is, direct from co-ops or women in the communities. Here are photos of items in my personal collection.


I supplied an outline of my foot on a sheet of paper to a Dene woman in a Great Slave Lake community, and received the beaded slippers a few weeks later.

In winter indoors I wore these cozy mukluks below lined with stroud and trimmed with dyed rabbit.

These are my well-worn leather mittens from Baffin Island, trimmed with sealskin. The removable stroud lining facilitates drying.

Below the treeline you'll see many wearing Dene mittens like the ones below. Northerners wear thin gloves inside the mitts. When fingers are needed to grasp objects, they can drop the outer mitts and let them hang by the strings.


My son, one quarter Métis, inherited creative ability. Note the early sign – a green marker ‘decoration’ on the right canvas upper of his toddler-sized mukluks!

Alas, I never learned to do beadwork. However I found a blog post by a lucky young teacher in Hay River, NWT who writes about her lessons from the real deal – a Dene Elder.

If you’re yearning to own similar Dene handmade products, you don’t have to travel to the northern communities anymore to buy them! See my Pinterest Diamond Lust board for examples of northern wearable art available for purchase on-line.

Bio: Madelle lived in Yellowknife, Northwest Territories, the Diamond Capital of North America, in the early 80s. She drew from her first hand knowledge of the north to write a romantic suspense, Diamond Lust, about a beautiful geologist who becomes trapped at a remote diamond mine with desperate smugglers who will do anything, including murder, to escape to Yellowknife with millions in rough diamonds. The geologist’s only ally is a cop undercover as her pilot boyfriend to infiltrate the fly in-only mine site – and he insists on sharing her room.

See Diamond Lust reviews and posts about Life Up North at www.madellemorgan.com

Beautiful, Madelle. I don't have any clothing made by First Peoples but I do have a few treasured carvings of seals and two of owls created by Inuit craftspeople.

I love 'everyday art' that is accessible to everyone in a culture. Thank you for sharing the gorgeous photos.

I spent five years in Alaska when my children were small, and the youngest was born there. A Tlingit elder made him a pair of beautiful sealskin booties which, now that he's grown, have left home with him and been passed down to his son.

DIAMOND LUST is a wonderful romanctic adventure set in a fascinating place few have visited.

Thanks, Sarah. I had my son's fur-trimmed stroud booties on display for years. I'd have to do another post to show you everything I collected!

Hi, Madelle, What a fantastic collection you have. Your Pintrest page is awesome. I really enjoyed your post.