The Curse of an Angelic Child

by Vivienne Lorret
As the youngest of three sisters, I’ve had my fair share of near death experiences. Just to name a few—I was thrown down a flight of stairs, smothered with a pillow, chased by a wild-eyed two-by-four-wielding sister, and I was also locked in the basement on countless occasions. Out of all these, being locked in the basement was the most terrifying.
We had a haunted basement.
Beyond a narrow landing, a steep decline of uneven stair treads led down to an unfinished pit (designed to gather floodwater in the spring). Across from the pit, stood a narrow arch, carved out of the damp limestone walls. Our house-spirit lived in this room. We never used that room. In fact, we didn’t even dare look through the arch for fear of what might appear in front of our eyes.
Unfortunately… around the corner from there, in the deepest, darkest part of the basement, was where we kept the only light.

A four-inch chain dangled from a single bulb above the washing machine. I was too short to reach it. So, for the first few times I was locked in the basement, I curled into a little ball on the stair landing and waited for my parents to come home from work.
Gradually, my survival instincts had kicked in. I braved the stairs, praying all the way down that the dark forces that lived in the basement wouldn’t grab my ankles, pull me between the treads, and devour my soul.
Fueled by terror, I climbed on top of the washer. Teetering forward for the chain, I finally reached it. At last, there was light. However, the single bulb didn’t provide much. Instead, long, arm-like shadows stretched along the walls and disappeared into the hollow archway. I couldn’t take my eyes away from that blackness. It was as if my gaze had snagged on one of those sharp rocks and no matter how hard I tried, I couldn’t pull free.
I ended up falling off the washing machine, ripping the four-inch chain from the socket and blanketing the basement in complete darkness.
On the bright side, in my youth, I’d learned quite a few interesting facts that I’m now able to use in my writing. First, always be wary of turning your back on an angry teenager while at the top of the stairs. Second, if you ever find yourself beneath a pillow that your sister happens to be sitting on, chances are you won’t die. You’ll faint first, which sends her into a panic and causes her to jump off the pillow, providing you with enough air to return to consciousness. Third, dodging a swinging two-by-four offers a true test of your own quick reflexes. And last… when locked in a basement prison, make sure to hide a wire hanger the top of the stairs. It is the perfect shape and size to slip through the crack in the door and lift the latch for a quick escape. 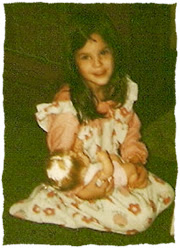 Wishing each of you a happy and safe October!
Posted by Unknown at October 15, 2014

Oh My, Viv!!! What a childhood you had! By chance did your older sisters let you out of the basement just before mom and dad got home or were you released from the dark pit by them?

I can see that your childhood experiences can translate into how your heroine's survive challenges in your stories.

And you were angelic! I can tell from the picture...

Ah! Judith, I feel as if you knew my sisters. Lol!

Yes, they always let me out right before our parents came home from work. Our mother subscribed to the "fight your own battles" method of parenting. And in the end, I learned how to be well prepared. My Girl Scout training came in handy. :D

And of course YOU never did ANYTHING to your sisters, right?

It's amazing we all survived childhood, isn't it?

When my eldest complains about having two brothers instead of the sister she wanted, I regale her with tales of my younger sister smashing me on the head with a rock, threatening me with scissors, frequent shoves down the stairs... how my sibling and I never killed each other or ended up in hospital at least once, I'll never know (yes, I probably did things just as bad to her but I don't remember those, lol). Needless to say, it makes her grateful for brothers who are simply annoying or disgusting.

I might have had to polish a spot of tarnish from my halo, a time or two, Sarah. O:)

As the mother of two boys and no girls, (and after growing up in an all-estrogen household), I can say that boys are MUCH easier (but still gross at times).

Plus, I'd always wanted a brother. :)