A couple months after my husband died, a well-meaning friend suggested a book might help—a self-pubbed collection of grief memoirs written by my friend’s friend. Somehow, I managed to don my polite face, while I inwardly cringed. And re-cringing. And cringing again.

First, nothing was going to help but time; I had accepted that. During that period, the only way I could get through my day was to play happy music and pretend my grief didn’t exist (in full disclosure, a lot of Ben & Jerry’s was also involved).  Yet this friend wanted me to read about more death? I already knew I wasn’t alone in my experience, but to this day, I don’t really understand how people think hearing about another tragedy can possibly make another person feel better.

You can relax, I’m climbing off that soapbox. 😊 But on to the next… Second, (and I repeat: “Second!”) he wanted me to read a collection of memoirs? By an untrained author? Was he nuts? Maybe my friend was trying to kill me.

Anyway, I accepted the book with a semi-smile, and promptly donated it to Goodwill.  Only a few months later, at a music festival (yes, the music actually helped 😊), I met the memoir author. And formed an instant connection. Not only because we had a shared widowhood experience, but because Mary is actually one of the coolest people alive.

Even so, I still couldn’t read her book.  My philosophy is to never intentionally do something that’s going to make me sad. And knowing the author would make Mary’s pages even sadder.

Only Mary decided to turn her Loss World Monologues into a play. And I was asked to participate.

“Say what?” It’s like these people don’t even know me. What part of I can only handle grief with humor did my friends not get? Even worse, haven’t they heard my squeaky voice?  And even though I can get loud with the best of them, squeaky voices do not project.  Not to mention my acting experience is zero.

Not being able to say, “NO,” or even no, or “I don’t think so,” I auditioned, thinking I’d finally found my way out.  Only I didn’t realize (THEN) I had a major advantage—I could memorize quickly. In hindsight, I might have flubbed a few of those lines.  More important though, I had lived through the subject matter.

Anyway… I somehow survived the three months of rehearsals; rehearsals which entailed hearing (and speaking) about the despair that follows the death of a spouse. Despair I felt but didn’t want to acknowledge. And before you ask—no, it didn’t help. After every rehearsal, I’d go home and play Bon Jovi and Def Leppard at earsplitting volume. That helped.

What did help was the lasting friendships I formed, especially with the Mary. When we were celebrating the end of a successful show, someone jokingly asked, “When are you and Mary going to write the sequel?”

I replied honestly, I can’t do this weepy, but if you want to do a comedy, I’m in?”

One of Mary’s monologues detailed her boy box—a cigar box that she used to keep the cards of guys who asked her out out after her husband died. After ten years, she had a lot of cards.

Thus, The Box Box was conceived.  😊

The ebook is scheduled for release April 9th, and the print book will follow shortly.  If any of you in the RTG world would like to be a beta-reader and provide us some feedback, we’d love to send you a free electronic copy.

Until then… Happy Wednesday! 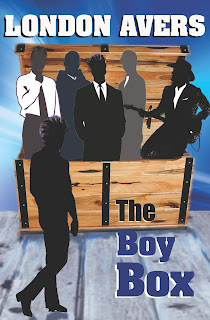 What would you do if the undertaker’s son made a pass at you?
At your husband’s funeral?
Jana Byrd stuffs the cougar-hunter’s card into a box and forgets him.
As she struggles to focus on one-day-at-a-time after her husband’s death, Jana acquires several dozen cards from wanna-be-lovers, friends-seeking benefits, and the occasional nice guy.  All the cards remain in the Boy Box, until Jana’s friends decide they should all date again and decide to draw names from the box.
Forty-something Jana scoffs at the idea of seeing other men.  She’s still in love with her five-years gone soulmate and chats with him daily.
Her BFF Nanette Meeks is equally appalled by the dating scheme.  How can she possibly date again after her ex-husband divorced her to marry his bimbette-a mousy little thing barely out of her teens?  What man can be trusted? Other than her former spouse’s younger brother?
Faith Chanton, a former Miss Georgia and jet-setting preacher’s widow, refuses to be thwarted by her friend’s dating resistance.  She demands the four ladies draw cards from the Boy Box and “get back out there.”
The hot blonde, with loads of charisma and an even bigger bank account, shouldn’t need a Boy Box card to have men worshipping at her temple.  Only the man she seeks doesn’t exist – one who walks on water and is deliciously devilish in the dark.
Faith’s dating enthusiasm is buoyed by Sapphire Bellona, the youngest of the group.  She exudes the overconfidence that only occurs at age twenty-eight, and believes she can have any man she wants. Sapphire is continually mystified when date number two never happens.
Only nothing is as it seems.  Will the friendships endure as the four women start the arduous journey of dating after death, divorce and bra fat?

Wow! All I can say is Wow! There is a difference between asking someone if it would help to read about other people's experiences and telling them what they should do. Can't say I'm surprised as well-meaning people do think that what would be helpful for them will be helpful for someone else.

And then I got to The Boy Box! You and Mary certainly learned to make those widow lemons into lemonade. And you meeting someone who not only becomes a friend but a colleague/co-author. Love the name by the way. And, I'd love to be a Beta Reader. If I'm chosen, let me know what you want for feedback - general or anything in particular.

Well-meaning friends are a gift and a curse for sure. Grief is one of those things that is certainly individual. What a serendipitous experience to not only meet the memoir author but to become fast friends AND do monologues. Mind blown for sure.

I think your Boy Box book sounds intriguing and maybe even fun. Unfortunately, my schedule for the next six months is too crazy to read anything. But I'm guessing you'll have lots of people wanting to read your book. If you need more, let me know. I would be happy to share it with my reviewers as I suspect a number of them would be interested.

Congrats on the new collaboration!

I would have been happy to be a beta reader. Loved the post and loved where you ended up with it.

A Funny thing happened on my way to .... reading Robin's Blog. LOL!
Little did I know (until now) that she donated my first book "The Loss World" to Goodwill. My FIRST BOOK. *sigh*

AHH, life is indeed interesting. Not only did she end up acting in my play but I am delighted to say she is now one of my dearest friends. We drank many gallons of coffee while writing "the Boy Box", and many scenarios due to punch drunk late night brainstorming ended up on the cutting floor. Working with Robin was great fun, loaded with laughter and I benefited by her vast experience.

By the way, the play that brought us together "The Loss World Monologues" has now garnered interest in theatres in other states and cities and a new iteration "The Loss World Monologues 2.0" is a collaborative effort with a singer/songwriter from LA that has 3 performances coming up this week in the Carolinas. So, in my mind, the Karma written in the pages of the book are continuing to work its magic...and the Goodwill donation, evolved into Good Will....