Amusing Family Stories of Life as a Daughter of a Twin ... Delsora Lowe


I grew up the daughter of an identical twin. Needless to say, living with a twin wreaked havoc, in hilarious ways, for my sister, cousin, and me. From the time we were small, none of us could tell out daddies apart. We’d point and look at the others for confirmation, “Is that your daddy or mine?” We finally figured out that although both had sandy-blond hair, my uncle had a penny-sized patch of white hair in the back of his head. So, each time we got together, we three girls would circle back behind “the boys” and point. “That’s your daddy, and this one is mine.”

The day I was born, my parents moved out of an apartment into a new house. My uncle helped them move. When Mom went into labor, the three drove to the hospital. That was back in the day when husbands sat in the waiting room, or more likely paced. Dick sat with my dad. When the nurse came out to inform Dad he had a daughter and told him to follow her, the two trotted behind the nurse. When she turned around and saw identical men, dad said the look on her face indicated she thought, “Oh my. Does this lady even know who the father is?” Dick realized, whoops, not his party and quickly retreated back to the waiting room.

Both my dad and uncle went to law school. My uncle finished up a year or so before my dad. When my dad got married and wanted to go on a honeymoon, he was told he could not miss any classes. So, my uncle sat in for my dad during his honeymoon and no one ever knew the difference.


My dad and uncle had the habit of showing up at holiday parties dressed identically, even though they never consulted. It happened year after year. On more than one occasion they also chose the same, as in exact, presents for their wife’s birthday, despite their birthdays being at different times of year. One year, my aunt was visiting, and said to mom. “I have that exact vase. Where did you get it?” My mom said, “Oh, Bob gave it to me for my birthday last year.” Aunt Martha replied, ”Dick gave the same vase to me for my birthday last week.” This also happened multiple times without the brothers ever comparing notes before-hand. 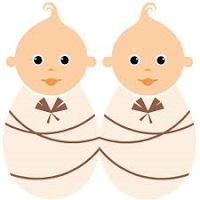 When my dad had hernia surgery, my uncle waited in his room until he was wheeled back from recovery. My dad looked at my uncle. “Want to have some fun? Walk by the nurse’s station just down the hall, wave and say I’ll be back in a few hours. Going out for a movie.” You can imagine the chaos that ensued as nurses ran after my uncle, while others ran down the hall to my dad’s room, only to discover him in his bed and laughing that his joke worked so well.

One rather amusing scenario caused problems until all parties could explain what happened. You have to understand, my dad was the talker and jokester of the two. My uncle was not a conversationalist. In fact, my sister and I used to laugh that Uncle Dick grunted more than he spoke. Even when he initiated a telephone call, he’d ID himself, then say nothing. On our end, after a long silence, we would finally have to prompt Dick by saying, “what can we do for you?” before he realized he hadn’t said a word after “hello.”

One night my uncle dined with my aunt. A couple approached the table and started yakking away. Dick just nodded a few times and probably said something about “nice seeing you.” A few days later the rumors were flying among dad’s friends that he was seen out with a woman who was NOT his wife. My uncle never explained he was the twin brother. His explanation was “I just figured he knew I was your brother.” It took some sleuthing on my dad’s part to even figure out who the couple was who thought he was stepping out on his wife. In the end, luckily, everyone had a good laugh.


The moral of this story, about twins in families, is there is never a dull moment. One of these days, I’ll have to write a story (or maybe two stories) about twins.

Do you have any funny family stories that would add to the plot of a fun story – either one you’d like to write or read?

A Valentine Story - On Sale through February
Amazon
https://www.amazon.com/Moonlighting-Serenity-Harbor-Novella-Starlight-ebook/dp/B075TK7KYS/

In the last picture, I think your dad is on the right and uncle on the left. You have a bazillion life adventures to add to your books, Delsora. Happy Writing!

Yes, Judith, having a dad who was an identical twin did make things lively. And different from my friend's experiences :-) Yes, many ideas that could be tweaked for a book OR a short. My cousin and I still laugh over those adventures - and the top photo was courtesy of my cousin.

What a hoot! Your dad and uncle are pistols. From the grin my guess was the one on the right, too.

I'm guessing the one on the right, the one smiling (probably at his own joke) is your dad. I especially love the story about your uncle sitting in the classes while your parents went on their honeymoon. All this time, and I've never known this about your family.

Yes, the one on the right is my dad, the jokester - awful puns got him laughing the hardest as we all groaned :-) Or really bad jokes. But my cousin's photo is a good one of both of them grinning.

I'm guessing the dapper, laughing fellow on the right is your dad. But please clarify...did you uncle fill in for the honeymoon...or the class?

Loved your stories, what fun!

Hmmm...Arel, now that I think about it...I can see where you would get that idea - especially with the story about the day of my birth. Ha! Kidding - yes, he filled in for the classes, even taking notes and answering questions :-) He missed the honeymoon.

Fabulous story - I bet they kept everyone jumping when they were kids. I've heard tales of identical twins dressing alike without consultation, and your Dad and Uncle Dick are further proof it happened. I love that your uncle sat in on college classes so your parents could go on their honeymoon.

Yes, there were tales from my grandmother about them twins "encouraging" the youngest uncle to try flying off the garage roof with a towel as wings. Uncle Walter ended up being the dare-devil of the four brothers (fast cars, his own plane, etc.)

"So, my uncle sat in for my dad during his honeymoon and no one ever knew the difference."

Love this line and definitely could be used for a short story or a novel. I've known many twins in my life. Fraternal twins run in my family. But throughout school I always knew at least one set of identical twins. It is amazing how they think alike and act alike even when apart.

Thanks for sharing all the funny things growing up. I can't begin to imagine questioning who my father is.