The scariest scene for me to write wasn't even scary....

This month's topic - the scariest scene you've ever written - is something I had to really think about because I don't write anything scary, as a rule. My stuff is all light, loving fluff with witty banter and an HEA. No one runs through a haunted building with ghosts or demons chasing them.
So...what to write about?
Then it came to me. I write a great deal of emotional stuff - people and pets dying, relationships breaking up, fights with parents and siblings. And death. Many of my books have a loss in some way or another in them. So, the scariest scene for me to write - ever- was in my third book, FIRST IMPRESSIONS. It was the death of a beloved cat. 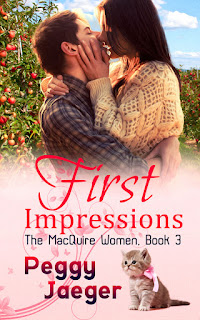 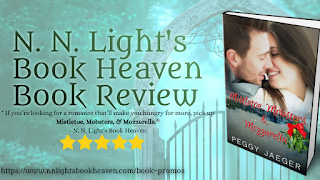 IF you're looking for me you can find me here: FOLLOW ME
Posted by peggy jaeger at October 23, 2020

I doubt I could write a "scary" scene. I don't have the emotional ability. But you're right about what kind of scary scenes there are in romances. And sometimes those are scarier because they can really happen. I'm sorry you lost your cat and I understand why that scene was hard to write. Losing pets is difficult. My kids have had so many pets, and we've lost several. It's always hard.

Wow. Yeah, I can only imagine how tough it must have been to write that scene.

What a sweet story about your 'baby'. And your book sounds wonderful! Best of luck.

What a sad scene, Peg, but beautifully written. Hugs!

As the mother of several fur babies, this is one of the hardest decisions to make. Handled beautifully by the way, and certainly brought on tears. Thanks for sharing. Loved your hero.

Kara - it's true...sometimes emotions are more scary to write than actual gore and guts!

Jennifer - it was brutal!

Barbara - thankyou for the kind words and for stopping by today!

Marcia - thank you for your kind words- and just FYI ( I love my hero - PAT - too! heehee)

"They" some years, maybe decades back, added death of a pet to the list of most stressful life moments and you captured "why". It is one of the most challenging decisions I've ever made and because I worked with end-of-life decisions with people, it had a far-reaching effect and I did some soul-searching for years.

Its bad enough to loss a beloved pet, but to write something similar in a book would be terribly hard. Kudos to you for forging ahead.

Judith - truthfully, I expected my editor to tell me to tone it down or get rid of it. I was so surprised when she wanted to keep it, exactly as written. I guess I've stopped listening to "They/them" and just keep writing what I want to read.

Tena - thank you for your kind words!

Oh, Peggy, a sad, but a lovely scene, in a scary, heartbreaking way. Been there, and done that, and it is never easy. I can see why that would be an integral part of the story between hero and heroine.

By the way - just finished your "Mistletoe, Mobsters, and Mozzarella" and loved it, although a bit of a scary scene at the beginning, but yes, you finished the scene off in a humorous way. I kept reading I because know your writing and knew you'd never let anything bad happen to the heroine :-) This is one of the books I will feature in my November RTG blog :-)

I can't have a pet die in one of my books, just cannot write it. You're brave, Maddie. You're a great writer, too. Best wishes for continued sales.

Oh, Deb - THANK YOU sosos much. I'm so glad you enjoyed it. It was fun to write Tony and Donna's story. Thank you for your kind words

Thanks, Caroline. I think you meant me, not Maddie, so I appreciate being called brave when I'm the biggest wuss in the world LOL.

Writing this through tears. I do believe that when you write from your heartfelt experience, it is the most true and most perfect. Years ago, I had a scene where my protagonist's father dies. When I approached that scene in the book my father was suddenly hospitalized and died two weeks later. I didn't go back to that book for an entire year. I tried but couldn't.

I've lost many cats over the decades and every time it is extremely difficult. Grief does not get easier. Caring people do not become inured to it. However, I do believe that writing about grief in books is very important to share that with the readers, particularly when it makes a turning point in the life of the characters. It is important to show we all grieve and, if we are able, we find a way to live on without that person, that beloved pet, that part of our body we lost. I truly believe that grieving shows love and compassion. We should be proud we are able to love so much that we grieve. Thank you for sharing this moving excerpt and your own story around it.

Oh Maggie - you brought me to tears!!! I always go with my gut with my writing, so I was so happy when I let the scene stand as is and my editor agreed. Grief is a part of life. As a nurse I've seen many people get stuck because they've never learned how to grieve.