This year for November Romancing the Genres are reviewing Christmas books. I chose “Let It Snow”, by Nancy Thayer. I had never read anything by Nancy Thayer, so she was a new author for me.

It’s a sweet Christmas story which takes place on Nantucket Island. The heroine Christina Antonioni is a gift shop owner in one of the ‘sheds’ on the wharf. The other shop owners are her friends and they are an eclectic bunch. 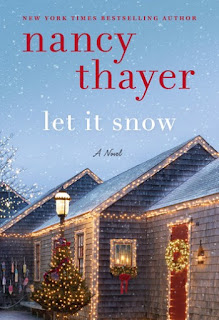 Christina befriends a ten year old girl who had tried to shoplift from her store. She hires the young girl and becomes her friend. Wink, the young girl, helps with unpacking the Christmas shipments and decorating the store.

Wink lives with her Grandfather while her mother is going through a divorce on the mainland. Turns out the wealthy Grandfather, Mr. Bittlesman, is the new landlord to the shops on the wharf. Mr. Bittlesman is a Scrooge, and plans on raising the rents the first of the year. This would put all the shop owners out of business.

Wink introduces Christina to her Uncle Andy who has recently moved to the island. With the  help of Wink’s Uncle who is not only a handsome, but charming bachelor, Christina feels this will be the best Christmas ever. The only hitch to their budding romance is Andy’s father Mr. Bittlesman.

Christina hosts a tree decoration party for her friends. Her parents passed and she doesn’t have any brothers or sisters. Her shop and her friends and Nantucket are the most important things in her life.

Mimi, Jacob and Harriet, the other shop owners, along with Christina try various ways to soften up Mr. Bittlesman to no avail. Finally, they dress in Victorian clothes and go Christmas caroling at Mr. Bittleman’s mansion. Unbeknownst to them, his wife who had passed was a wonderful soprano singer. This touched his heart and he sends a Christmas letter to the shop owners reducing their rent by twenty-percent!

This story gives the reader a real feel for living on Nantucket Island, especially during the winter and holidays.

Andy is such a kind and considerate boyfriend. He gets the shop owners together with his own family to have a surprise Christmas Eve party for Christina at her house.  He doesn’t want her first Christmas Eve without her mom or aunt to be spent alone. This was a very touching scene. 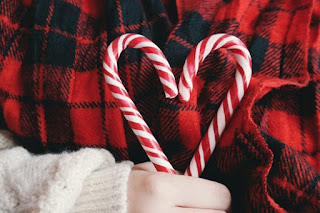 She is invited to Christmas dinner the next day at Mr. Bittlesman’s house with Andy, Wink and the rest of the family.

Andy and Christina’s relationship develops over the first couple weeks leading up to Christmas Day. A sweet slow romance, with of course, a happily ever after!

The themes of friendship, love, family and self-discovery in “Let It Snow”, keeps the plot moving and insures it is a holiday story to remember.

My Christmas I remember fondly is when my family lived on Guam. We got to go swimming in the ocean which was amazing.

The other Christmas was when I was first married and lived in MI across the street from a family with seven children. 3 foot of snow and no one could get to town to see Santa. I dressed in my Husband's red hunting suit, pillow stuffed inside, black boots and red hat, makeshift white beard, and I was Santa for a night! The wonder on their little faces made me feel so good. I had fun!

Will you share a Christmas memory with us?
Posted by Diana McCollum at November 08, 2019

Diana, what I have the fondest memories of over many Christmases is the excitement of first my son and then my granddaughters and lastly my great grands. Children add so much with their wide-eyed amazement at the tree and trimmings. My granddaughters loved to help me bring up the bins of Christmas decorations and created a tradition of where different items went. The lights I have up year round in the house are because my oldest great gran was here for her first birthday and her delight at seeing all the sparkly lights kept them up around the fireplace after the formal holiday was over. In fact she's been gone 3 years now but I still have them up as a lovely reminder of the delight on her face and just because I like bling!

Wonderful blog you just get better and better with each one you write. Merry Christmas.

Thank you both for stopping by!

Great review, Diana! One of my most memorable Christmases was the year we had a family reunion at our parents house. We were scattered from California to Texas, but we all made it with our families to Oregon. It was amazing!